In case you’ve been living under a rock or are not inclined to show interest in video games, you might have heard about the rhythm game “Beat Saber”, released in 2018 for PC and later adapted for Playstation VR and Oculus VR headsets.

In the virtual reality of Beat Saber, you carry a lightsaber – not unlike a Jedi knight – in each hand are are supposed to slash through blocks that come flying towards you.
Speaking of Jedi, there’s even een mod that allows you to play with the Darth Maul dual saber.
But I’m diverting… Late april 2021, I caved under peer pressure and got me the better value-for-money VR headset you can find : the Oculus Quest 2.

Disclaimer : yes I am aware that I have to sell my soul to the devil, sacrifice a virgin and deliver my first-born to Lucifer, because you can’t use the Oculus series anymore without a Facebook account and have Mark Zuckerberg know your every move (literally)

€350 wil net you the best VR €350 will ever buy (for now) and this price statement is – commercially spoken – a slap in the face towards other VR headset manufacturers, stating it CAN be cheaper.
Well done, Zuck.

One of the many budget cuts that has been made here is the so-called “inside-out tracking“, where the headset has 4 tiny camera’s built-in and doesn’t use an external set of cameras to track your movement.
This has advantages as well as shortcomings, e.g.  :

It’s now almost August 2021 and I still have no regrets on buying this headset. Neither have the CIA been knocking on my door asking why I have this thing on my head every evening and play super-realistic VR shooting games.
@CIA, if you’re reading this, you have no power here.

Enough on praising the Quest 2.
Let’s focus on the subject of this post : Beat Saber.

Some of you might know I’ve been a sucker for rhythm games for a long time now.
When Dance Dance Revolution finally hit the European market, I gladly taped my plastic way-too-expensive dance mat to my floor tiles (thank you, Super Dragon Toys for ripping  me off lol)

When Guitar Hero got released, I was an early adopter.

Samba De Amigo ; some OCC (the lanparty) visitors might remember me playing this insane game for 10 hours straight.

Why did I wait so long to hop on the VR hype train to play this amazing game ?
Well… I’ve never been a “true” PC gamer (translates as : I was/am too poor to buy a VR gaming rig)
The Oculus 2 was the first product to give me an affordable but real VR experience (I’m not counting you, Samsung Gear VR).
To this date I’m still gaming on a minimal setup, which just about covers my needs, but nothing more.

I wanted to see if I could lose some weight, playing video games as it’s been 5 years since I (hyper)actively played on a dance machine (In The Groove 2), where the latter kept me at 85kg, being a 1,85m guy.
“The good life” had other intentions with me, so in order to get back in shape I needed a workout. I hate going to the gym and I’m not a weight lifter nor am I a runner, so alternatives needed to be sought.

At first I bought Beat Saber on the Oculus store which runs smoothly and was a fun little workout.
Until… I discovered bsaber.com, where you can add custom made songs to your existing Beat Saber game (after some software fiddling)

Dopamine released at 110% rates in my body as some of my old favorite songs became available to play in Beat Saber all of a sudden.
A couple of friends (hey, Dax & Sogg) had just gotten into VR as well and played their game through Steam.
Being hooked to the game but having no way of sharing or comparing my scores with them, I made the decision of switching to PC instead of using the standalone version of the game.

Luck had it that I could find a (relatively) cheap graphics card upgrade for my now 8+ years old “gaming” PC so I could finally get the minimal specs for a VR-ready PC (sorry nVidia GTX1600 with 3GB, you really weren’t VR-ready even though the box said so :p)
One expensive USB cable (and a little later one expensive 5GHz dedicated access point) later, Beat Saber was ON!

This is where the competitiveness came in.
Beat Saber has a mod called “ScoreSaber” which allows for custom songs to have a scoring system of their own. In fact, ScoreSaber is the generally used scoring system for the game instead of the built-in scoring table.
You compare scores based on your Steam account name and are ranked by country and worldwide.
Starting at the very bottom of the scoring table and being a bit adept at rhythm games, the growth curve in which I got to top 200 of Belgium worked as a huge motivator.
Having friends that like the same f*cked up style of music as I do, helps as well <3

I currently reside in the top 150 of my country, where the real work begins.
I know my Quest 2 hardware will not be sufficient to reach certain levels, but I’m having an awesome time nevertheless AND I lost some weight already. Not to mention the fact that I feel way fitter (in the British and the American sense lol)

On top of that I get to make these cool mixed reality videos and I’m having a blast. 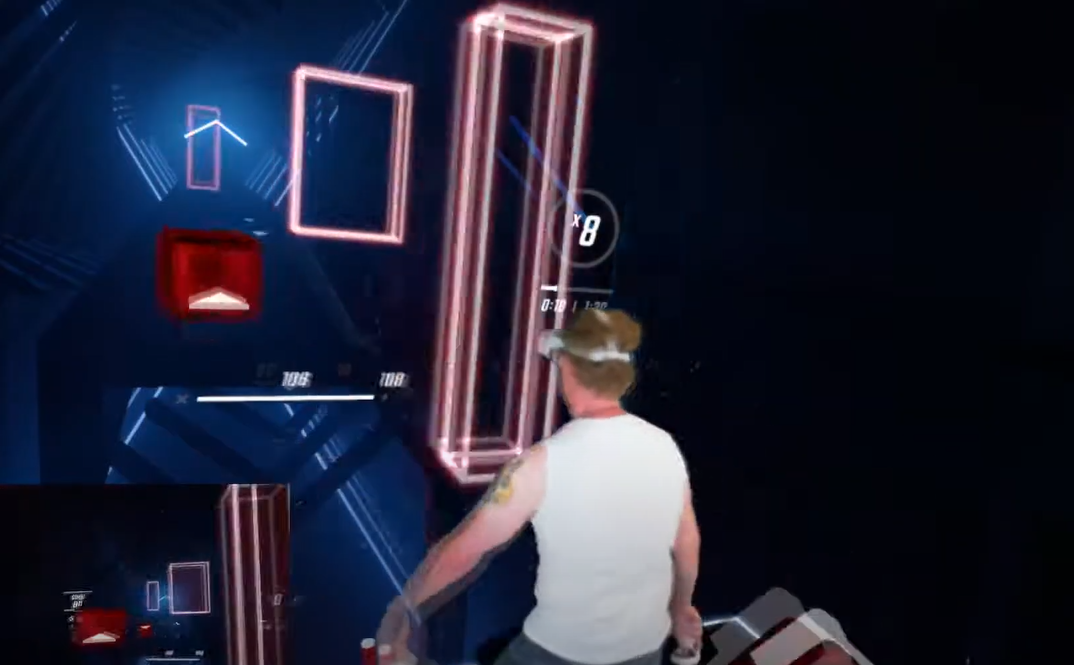